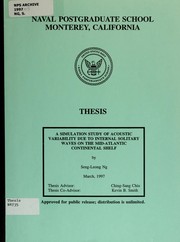 During the summer of 1995, a multi-institutional field study called Shallow-Water Acoustic Random Medium (SWARM) was conducted in the Mid-Atlantic Bight continental shelf region off the coast of New Jersey. Environmental and acoustic sensors were deployed as part of SWARM to measure and characterize the internal waves and their impact on the spatial and temporal coherence of the acoustic transmissions. As part of the environmental monitoring network, two bottom-moored, upward-looking acoustic Doppler current profilers (ADCPs) were deployed. Large-amplitude, non-linear, internal soliton wave packets were observed to propagate shoreward from the shelfbreak. Based on the ADCP observations, a kinematic model of the soliton wave packets was developed to synthesize the corresponding temporal and spatial fluctuations in the sound-speed field. Using a coupled normal-mode sound propagation model and the synthesized sound speed variations, the variability of sound pressure and of the modal amplitudes for a 224 Hz CW transmission were simulated. The auto and cross-correlations of sound pressure at different depths, and of the modal amplitudes at a fixed range, were computed in an effort to estimate the vertical and temporal scales of the fluctuating sound field. The simulation method, the simulated acoustic variability as well as the results of the correlation analysis are presented and discussed in this report.